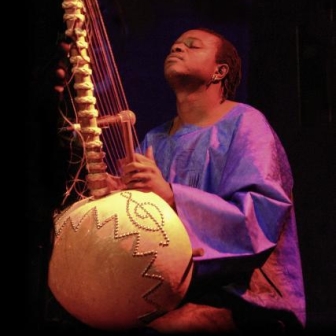 The Coute Diomboulou Band, led by Cissokho (who formed the group in Senegal in his early teens), is composed of musicians, mostly griots, from the old Mande Empire of West Africa. They play a mix of traditional instruments including the kora, tamma and djembe with modern counterparts: electric guitar, bass, and drum kit.

One of Senegal’s renowned musicians from the ancient family tradition of kora players, Cissokho, in addition to playing traditional Mande music, has also performed and recorded in many cross-cultural settings and festivals in Senegal, Europe and the UK (main stage Glastonbury/Womad). His diverse collaborations include Toumani Diabate/ Baaba Maal/AR Rahman (Bollywood film) and Will Gregory (Goldfrapp).

Deep in the heart of this band is the trance-inducing sacred rhythms that invoke other worlds that call down the spirits, but at the same time bring together the heart of ancient Africa and the bustling energy of modernity. The music is an extraordinary mix of Senegalese mbalax and afrobeat, grounded in African traditions – and is indescribably funky. One constant throughout is Cissokho’s extraordinary kora playing, demonstrating how he masters three parts at once: bass line, melody, and improvisations above them, mixing fearsome technique with a deep humanism and ability to improvise scintillating runs out of thin air.

Featuring the warm Latin Jazz vocals of Brazilian singer Luna Cohen, the quartet’s musical repertoire combines original songs by Luna with covers of such masters as Djavan, Dorival Caymmi and João Donato. Cohen has recorded 4 albums under her own name, all for the respected Spanish label Temps Record. Her 2012 debut album, Estrada Do Sol, received the 2013 Enderrock award in Spain, leading to various headline performances in some of the most distinguished Jazz venues & festivals around the UK, Spain, and beyond. In 2014 Luna relocated to London, where she has rapidly established herself as one of the finest singers on the music scene, performing in many prestigious clubs such as The 606, Pizza Express, The Bull’s Head & Ronnie Scott’s.

Paying tribute to the ‘Nahda’ era, Oxford Maqam embraces the sounds of the Arab Renaissance; an extraordinary period of creativity and musical innovation across the Middle East. Oxford Maqam’s vintage repertoire has gained popularity for its mesmerising recreation of Egyptian and Levantine songs that date from the 19th century to the early cinema era. From local cafés to royal palaces, they offer a lively and highly informed insight into the urban musical cultures prevailing back then. While comprising the traditional takht (Middle Eastern combination of instruments), the ensemble performs in an authentic style with an ear for the improvisatory practices of the time.